This section involves me researching and reviewing advanced art practitioners.

One of the art practitioners I’ve met has been my mentor Deborah Bankole, who I connected with through Sour Lemons. Deborah is a public programme producer at the Southbank Centre and she’s worked on putting together various festivals and events such as Africa Utopia (including the Sunday Service event within this) and the Meltdown festival (C’est CHIC Vogue Ball). 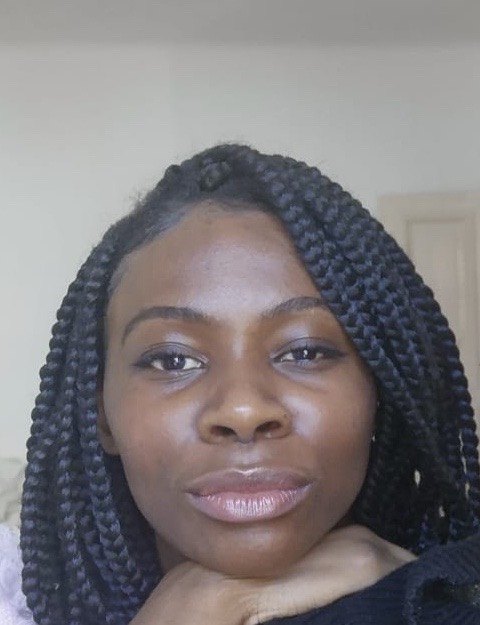 More recently I’ve had the chance to speak to two other art practitioners in order to pick their brains about various parts of their work. The first person I spoke to was Yomi Adegoke, author of Slay in your Lane, which is one of my favourite books. 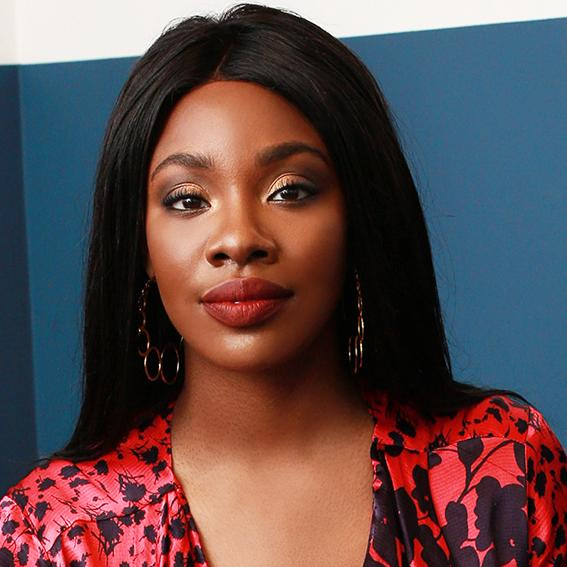 Yomi Adegoke is a journalist who writes about race, feminism, popular culture and how they intersect, as well as class and politics. She was named one of the most influential people in London by the Evening Standard in 2018.
I asked questions around her writing style and how she sourced information that she wrote about and how she decided to order it in the book. I think it’s important as a writer in any form when choosing to include stories, anecdotes and even personal experiences to think how you express them in your text and what impact this has on the overall piece of writing

Here is part of the conversation we had: 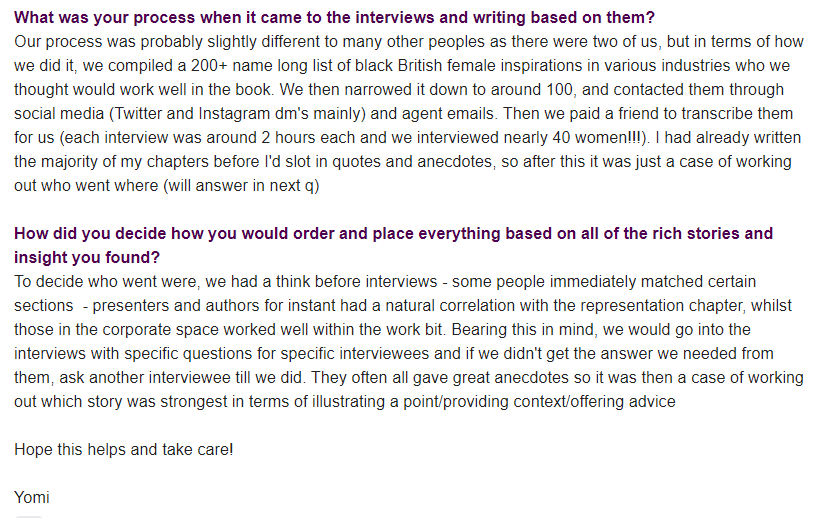 I also shared a piece of my work with her, this was prose rather than a piece of poetry (as I’ve been doing different forms of writing recently) and I got some feedback on it which I’ve copied below.

‘Just wanted to let you know I really liked the piece, it was very nicely written and poignant – I would perhaps suggest avoiding the use of ‘looool’ at the bottom (only because it threw me off right at the end, since the rest of the piece wasn’t very colloquial lol) but keep up the good work.’

The second person I spoke to was Inua Ellams. Born in Nigeria in 1984, Inua Ellams is an internationally touring poet, playwright, performer, graphic artist & designer. He is an ambassador for the Ministry of Stories and his published books of poetry include Candy Coated Unicorns and Converse All Stars, Thirteen Fairy Negro Tales, The Wire-Headed Heathen, #Afterhours and The Half-God of Rainfall – an epic story in verse. His first play The 14th Tale was awarded a Fringe First at the Edinburgh International Theatre Festival and his fourth Barber Shop Chronicles sold out two runs at England’s National Theatre. 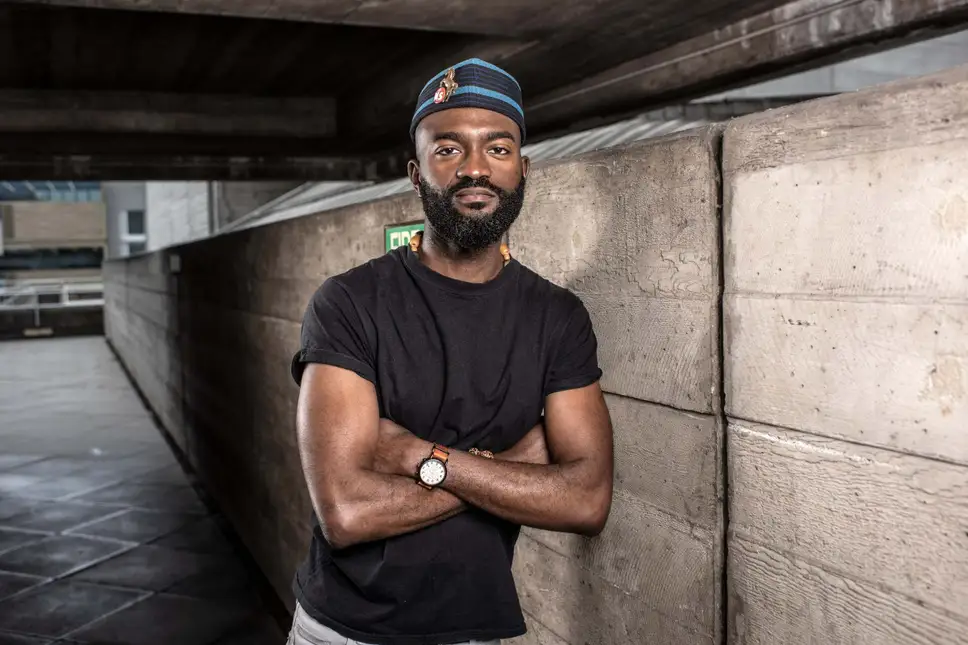 When contacting him, I asked some questions around the first stages of his career when he decided to become a poet and also the platforms he used to showcase his work.

It was really useful speaking to Inua, being so advanced in his career. What I found particularly interesting was his focus on studying the craft through reading poetry books, further research and even going to classes. Previously this hadn’t been something I’d focused on much but hearing this was useful and is something I will definitely do going forward to develop my craft.

In March I attended Three Sisters Wrap Party at The National Theatre. It was a celebration of the show The Three Sisters where various people came on to share poetry, many pieces relating to the themes of war, family relations, african culture and life in Nigeria – a few of the performers even spoke about their parents/grandparents being involved or directly impacted by the biafran war. Hearing the range and variety in the poetry was amazing and I really felt like I understood how each performer connected with the themes and even their own experiences that they chose to share. An exciting addition to the wrap party is that each performer chooses 2 of their favourite songs to be played within the breaks, so as well as amazing poetry we also got to listen to a lively playlist curated by the people in the room. Here’s a short snippet of a performance from the day.

I really enjoyed watching this performance. The performer, who I networked with following her performance, is an actor and poet called Tania Nwachukwu. I really connected with this piece as she talked about the small details about life in Africa in grandmother’s home which is something I can relate to having the same experience when I go back to my parent’s country – Sierra Leone. Though small, these details are what really make your experience when visiting West Africa and these are the things that you remember. This allowed me to connect with her piece on a different level.

I got the chance to watch Barbershop Chronicles online (during the lockdown period). I really enjoyed watching this show as it showed barbershops – a place for simply cutting hair – as a hub of culture where politics, sports, family and deeper life issues are often discussed. There were also learnings about the different countries that this was set in, from dialect, to specific facts such as words considered disrespectful in south african culture but what was highlighted was that despite the differences in their countries the barbershop stills served the underlying purpose of being a safe space.
Something really interesting about this play was the staging and how it reinforced the fact that even within different countries there is very little difference in the ‘barbershop experience’. There were very few props and it was kept very simple. The chairs and shaving equipment were basically the only things on stage and between each scene these were only moved very slightly reinforcing the lack of difference. What did change was the signage, that represented the barbershops in the different countries and this change was subtle, using the spotlight to point at each relevant store sign at the relevant scene.
Seeing the family relations within the barbers in the UK barbershop made the story feel very close to home, and I definitely saw brothers/friends of mine within those characters. I found the running dialogue between the young Ghanian and young Jamaican barber, teasing each about their cultural differences (e.g. when they talked about how Caribbeans drink a lot more alcohol than Africans generally) really relevant and relatable as that’s something I see often in my community.

Every month at Sour Lemons we have Supper Clubs, a monthly event in which we have external speakers within the creative industry attend and speak about their experiences. The highs, lows, the success, lessons and their journeys more generally.
In May we heard from which Daniel Bailey, Associate Director at the Bush Theatre and Lynette Linton – Artistic Director. Daniel’s story stuck out to me in a number of ways. He spoke about finding out about his passion for Drama, around college/sixth form before going onto to study Drama at Brunel. Later on in his career following his introduction to directing and finding his feet, he spoke about survivor’s guilt. Coming from a background in which he was involved in a lot of anti-social behaviour, when he decided to pursue his passion in theatre and really succeed in the industry – producing his own work and eventually making it director level – he felt a lot of survivor’s guilt. He would often think about the people he used to be around, old friends who maybe weren’t succeeding as much as he was (or seemingly so) and almost feel bad for his successes. This is something that affected him a lot particularly at the early stages of his career when he first started to peak. What helped him with this feeling was constantly reminding himself that he wasn’t and isn’t responsible for the lives of others. As much as you want to see your friends succeed, there comes a time where everyone has to go on their own path and work for what they want, and remembering this helps him to stay grounded. Relating to this, he mentions his pride and willingness to help others succeed where possible. Daniel talked about seeing people he once mentored or worked under him, progressing in their careers and getting to senior levels in the theatre world and how happy this makes him saying he’ll always support this and help people to reach their potential as much as he can. Hearing from Daniel really connected with me. Being at the stage that I’m at, where I’m pursuing new ventures and finding my feet in the creative industry, it’s easy to feel as though I’m ‘leaving people behind’ as we’re all doing different things and are different stages. There have been times where I’ve been featured on certain spoken word projects, or run workshops with important companies and have had friends/people in my network saying things like ‘you’re famous now’ which is often banter of course but it is very easy to feel survivors guilt so I really enjoyed this supper club and was able to connect with what Daniel was saying. 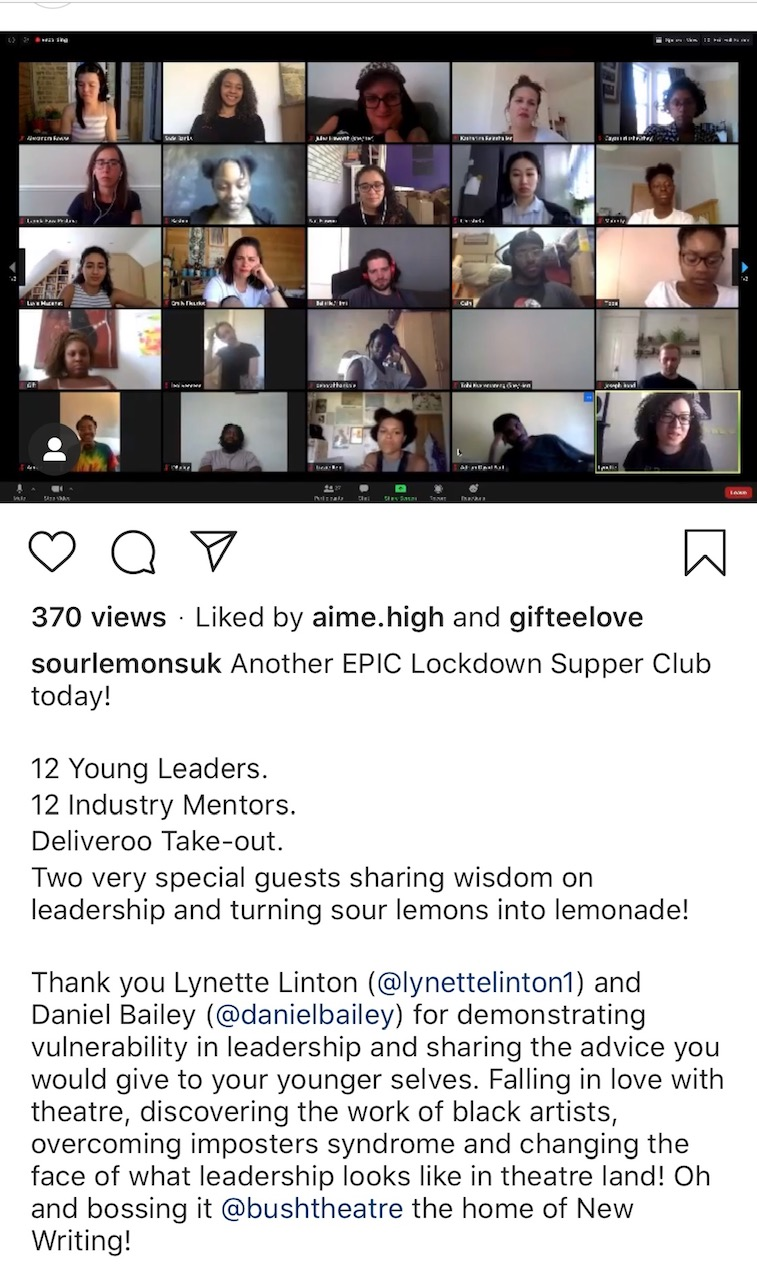 My experiences and how this has impacted my practice

The experience of mentoring has helped me immensely. Talking to somebody who I didn’t know prior, about my goals and where I want to reach in terms of my art and my career more widely has been helpful in allowing me to articulate my skills and experiences and has even reminded me how useful these skills and experiences are. I’ve been given challenges to help me think of my art in different ways and also think about how I can elevate and develop my craft.
Speaking to Yomi and Inua, as professionals in their own practises has opened my eyes to what are just a few of the requirements of their professions and how they take their creativity and put it into something tangible – their respective books and plays – which not only provides income for them but also provides entertainment and value for their audiences and readers.
I’m glad that I got the opportunity to attend the Three Sisters Wrap Party. The appreciation of art in the room that evening was at an all time and being among so many talented individuals, hearing the range of different poetry was great for me. I managed to network whilst there also and have kept in contact with some of the people I met. One of the techniques that I thought was really powerful in the wrap party performance was how Tania set the described the scene quite literally, using the senses to give real life examples of what she could see, smell, hear and feel and how this allowed me to picture myself being there, making me more engaged with the poem. Likewise with the Barbershop Chronicles, seeing the messages embedded within the play allowed me to understand how it’s possible to convey a bigger message through smaller everyday stories and dialogue. Something I may consider is the use of props to aid my story-telling when it comes to my live poetry performances. It’s something I’ve never done or even thought about before but having an object in my hand for example and reciting a poem as if I’m in a certain setting related to that object may be very powerful.
In my mid-way video, I talk about not knowing the range of possibilities and roles available within the creative industry and through I can definitely say that over the last few months I’ve been exposed to amazing new opportunities both through research and through some great networks and I’ll continue to both do research and work on my relationships with those people whom I’ve connected with.
Using the advice I’ve been given, I plan to be more intentional with efforts to develop my craft. Through studying others in my field, to watching more performances and shows and asking questions too. Inua’s advice around looking at both creating written poetry but also focusing on performing too in order to have multiple outlets is something I’m looking to do.