Prior to starting Sour Lemons course, the main way I’d keep up to date with what’s going on in the Arts World was through following various pages on Twitter and Instagram and also signing up to email lists like Young Vic and Livity.

Livity send weekly emails with job roles, training and other opportunities for young people to gain skills in some way. Run the Check and Social Fixt (who are focused on black talent) both send out job opportunities and Social Fixt often post threads and tweets with careers advice also. The Advantage Group post meaningful content about young people and the power of community as well as opportunities to get involved with the projects they run, the latest one being a casting call for a short film they created. Having a network is also very important here, the tweet from Kayode Ewumi above is an opportunity sent to me from a friend who knows my interests and therefore shares these things with me in case I miss something.

Throughout the course, I’ve learnt a great deal about job roles and even careers that I didn’t know existed. For example, at one of our first sessions we went to the Southbank centre where we had a session about the work they do generally speaking about their various festivals and programmes. A role I learnt about that was particularly interesting to me was a programming assistant role that took care of their schools programme, organising the workshops, sessions and events they held with primary school children in Lambeth and Southwark. I took notes in my notebook about certain roles and areas that were interesting to me and I also connected with some people on LinkedIn to keep updated on exciting work they’re doing. 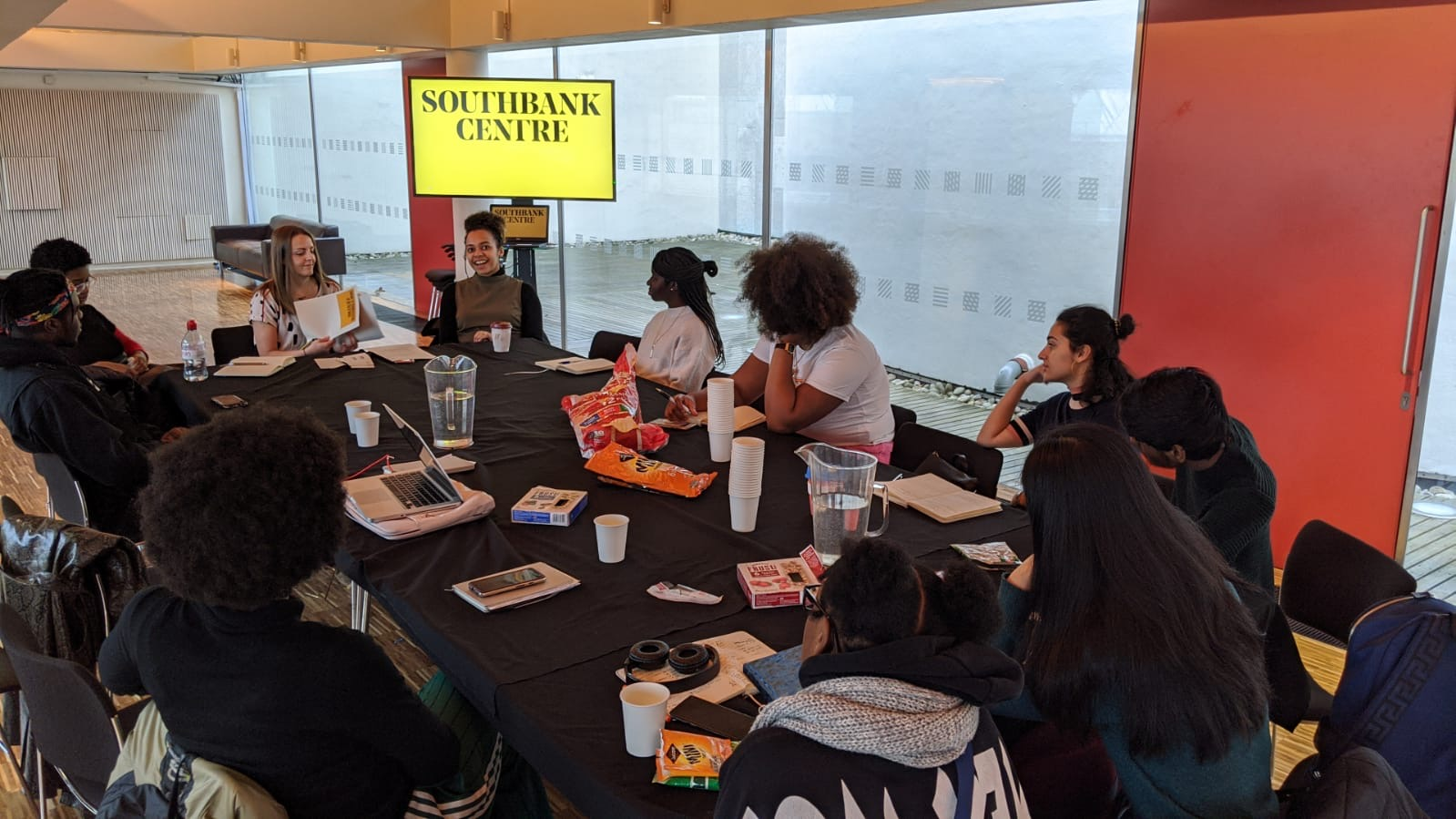 Although I didn’t get shortlisted, I believe that it was good practise for me to get into the habit of submitting my work and writing according to different themes too. Speaking to my mentor about this she was supportive in finding more competitions and prizes to enter (as she too enters these), so I asked her to suggest some and she collated this list which I took a look at. 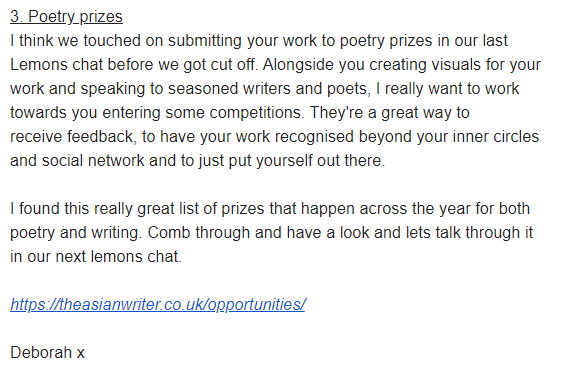 I also began to look at Today @ Apple, a set of short videos (as an alternative to in-store workshops) sharing different creative skills. One of the videos I decided to watch was around filming techniques. As video editing is a skill I’m developing ongoing it was useful to watch these and think about what I will use for my next video.

I recently secured a place on Words First 2020. A course designed by Apples and Snakes in partnership with the BBC to help spoken artists develop their craft. I found out about this opportunity through Sour Lemons, as someone shared in on our group chat for whoever was interested. 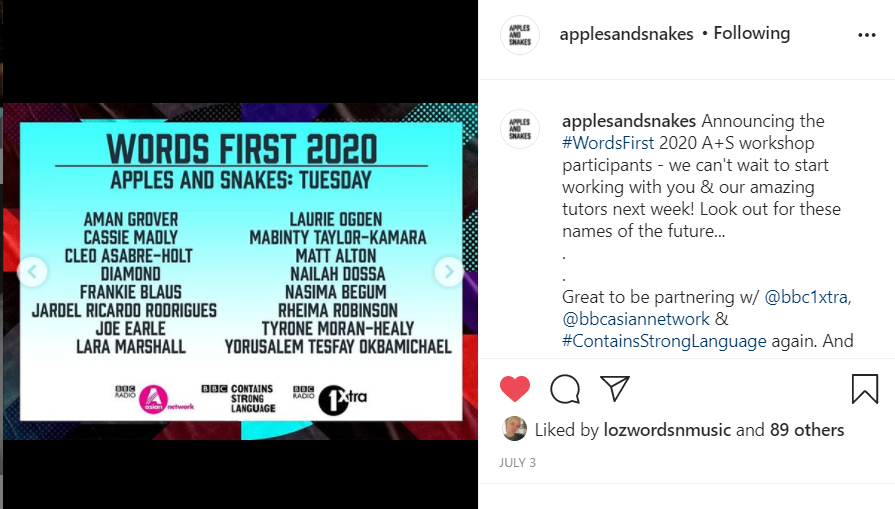 So far I’ve learnt the many different things:

Another useful thing I learnt which will help with the practise I’m trying to develop is how the use of camera style and video can impact a piece. In one of our sessions we watched different examples of camera styles and the impact they had on the poetry e.g. breaking the 4th wall (talking straight to the audience) and using effects such as muffled background noise, and fast camera shots for a poem about a deafness. This was a really useful tool and helped me to think about what effects I can use when creating visuals for my own poem.

This is an example of one of the tasks I did in which I found a painting (The Apprentice Boy by Richard Hamilton, 1998) and had to write a short poem in the voice of the person in the painting. A snippet that shows the performance I did for our digital showcase at the end of the 4 week course.

This course was really useful in allowing me to analyse myself as a writer and to challenge my writing skills. As I started writing on my own, there have never been any boundaries or guidelines to how I write so I’ve adopted a similar style for most of my poems. This course challenged this style through the various activities which required me to write in different ways e.g. editing my language to suit a specific tone of voice, using linguistic techniques like having a certain amount of syllables in a poem, thinking about the emotional impact I want to have, using physical prompts and so much more. It has definitely made me more open as a writer and I plan to to experiment a lot more with my writing. Getting individual feedback from the professional tutors on one of my pieces was extremely useful also, in seeing how I can get better.

In June I got the opportunity to hold a workshop with Sadlers Wells alongside another young leader on the course on institutional racism. The aim of this workshop was to hold up a mirror to this organisation, making them analyse themselves considering how their internal structures support racism in order to change this.

In order to plan this workshop, we had 2 zoom calls discussing ideas and putting together what we would do. Here is my planning document with all of my notes from the workshop, the top half labelled Mabinty being my section.

There’s a platform called Menti that we also decided to use, which allows the host/leader to share a question and all attendees can click a link and answer this question then their answers become a word cloud so all attendees can answer everyone else anonymously. During our planning session we tested this between us to make sure that it would work for the session. Below is an example from the actual session.

We spoke about our own experiences and led activities which would force them to reflect on themselves. In my section I ran a self-reflective activity in which everyone had to answer 8 questions on the topic of racism in big organisations.

Here are some of the questions I asked during the session:

Running this workshop though I was quite nervous, was really good for me. I got the opportunity to exercise my facilitation skills in a space full of leaders with very senior roles in the arts world. I was able to present with confidence and assurance in what I was saying and I received feedback that the session was very impactful. This experience supports my practise in a more general sense than the individual skills I’ve previously spoken about. Being able to facilitate a session with people is a useful skill to have and in the future if I decide to go onto holding sessions similar to this or in spoken word – my main practise – this experience in holding space is good practise for that. 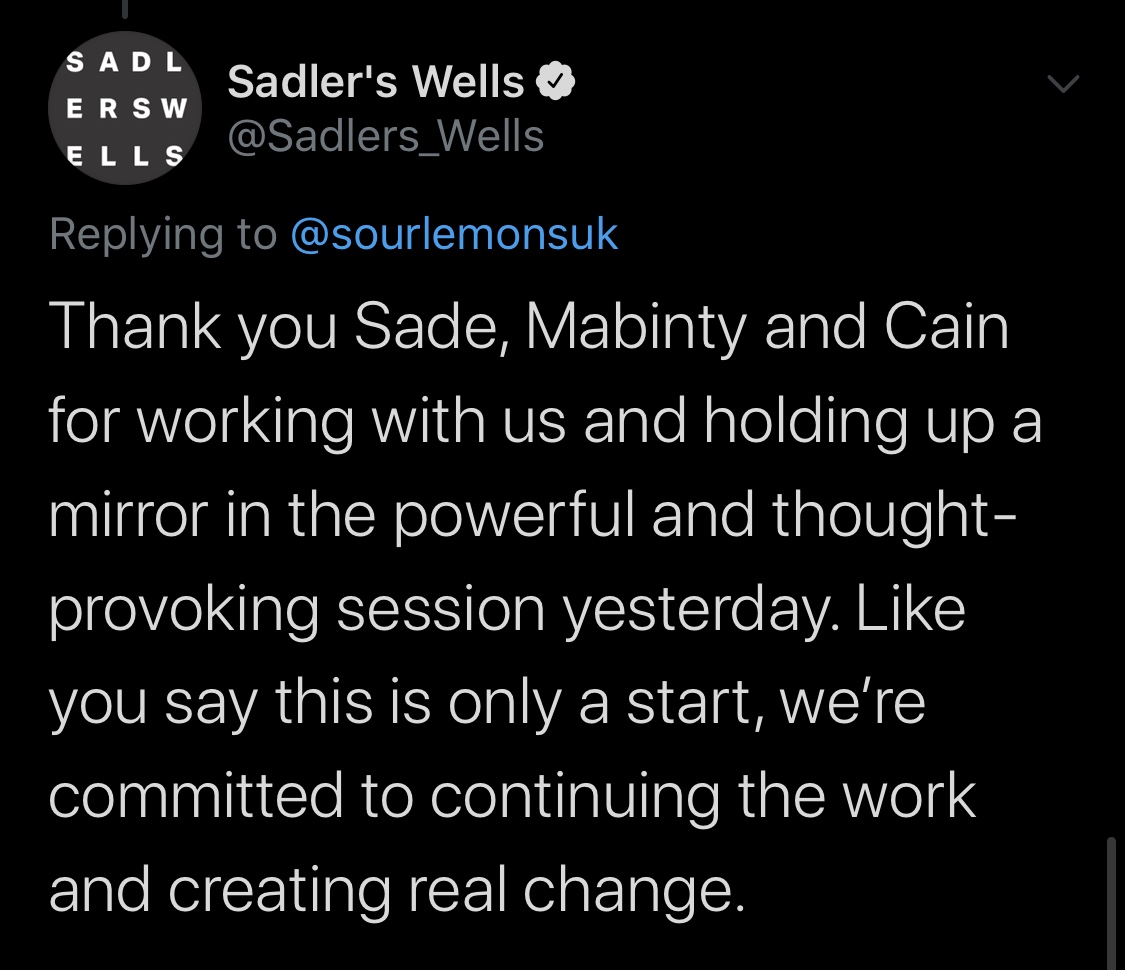 My practical involvement over the last few months has mainly taught me about the variety within the arts world career areas, training and opportunities generally.

For example, the practical training I’ve received through the Words First course has been really tailored and useful, being stretched and challenged through the different activities we did has helped me to think about the endless possibilities there are with poetry. It made me realise that I actually do have a writing style and I follow the same process when I write however doing things in a different way is a good way for me to make my poetry different and potentially improve my practise. This has helped me to consider what sort of things I can go into in the future.

The world of facilitation, which is obviously what I’ve received over the past 7 months now through Sour Lemons, is something else I’ve seen and explored and through this I’ve opened my mind to and have been actively researching new career aspirations in this. Facilitation is a lot less complicated than it may seem. If you have a skill or an area of expertise, holding a session for a group of people teaching this skill /educating on this area is something anyone can do and I will be looking to do this over the next few months.

This is a letter with some feedback from Owen, one of the producers from Apple and Snakes who ran the Words First programme.

Also, here is some feedback I received from the CEO of Sadlers Wells, following the workshop we ran.

‘I saw both Cain and Mabinty in action facilitating sessions during the intense time following the death of George Floyd when there was a lot of fragility, anger and anxiety in the air. They both dealt with this situation beautifully – not avoiding the difficult issues but facing them with honesty but also a humanity which left no-one threatened but rather willing to examine their own behaviours with a positive attitude and with a willingness to change. It as impressive to see two young people with such confidence in a zoom room with many participants who were more senior to them’
Alistair Spalding – CEO of Sadlers Wells