My main current art form is spoken word, this is both writing and performing. This is something I’ve been doing for ¾ years, I’ve done various performances and I’ve also produced written, audio and video content. Here are some examples:

The new skill that I want to develop is video editing. Generally I feel that video editing is a very cool skill to have, it’s something that will always be useful and because it’s fairly niche people are always in need of an editor so it would provide me with a lot of opportunities.
More personal to me, video editing will help with the spoken word videos that I want to produce this year. I’m hoping to start filming my own content, plus also creating lyric videos and having video editing as a skill will help with this a lot. I have some concepts written down already, so I’m super keen to get started on filming and editing. Here are some examples of similar visuals I’d like to create.

Here are some examples of similar visuals I’d like to create.

There are a few experts who I’ll be learning from, I have a few friends who do spoken word and edit their videos so I’ll be asking them what editing softwares they use alongside others within my network who are well versed in video editing.

The main two experts I’ll be speaking to are Cain and Sabrina to review my work and give me pointers and help after my first attempt which I decided to work on independently.

Cain, also on the Making Lemonade Programme, is a London based artist defining a space he calls ‘Afro-Magical Realism’. His main discipline is visual arts though he’s well versed in video editing also and aims to bring out the culture in every piece of work he produces. He’s done a few commission edits for various brands.
Here is an example of Cain’s work.

Sabrina is a friend of mine who specialises in photography as her main art form but also has experience in video editing through studying media at a-level. Her pieces are usually simple yet effective, using various pictures and short clips to tell stories. I was particularly inspired by a piece of work she had done earlier this year for a youth group we both attend, in which she brought together various clips to create visuals for a spoken word piece. Please see the video here.

Seeing this work has opened to my eyes to a new breadth of work. Companies/brands and even smaller organisations are often looking for people to video edit their work and if you have even a few examples of your work and they like it, you may be able to get yourself jobs in this field as Cain was able to. Speaking to him, I found out that he got paid pieces of work simply through networking and speaking to friends of friends who were in need of editing jobs.

To begin, I went out to film some footage in my area and had my first attempt at editing. You can view the video here. I did some research into video editing apps and their capabilities, playing around with this and also other techniques such as wide shots, speeding up clips and subtle transitions.

Here is an outline I wrote for the poem I really wanted to work on. 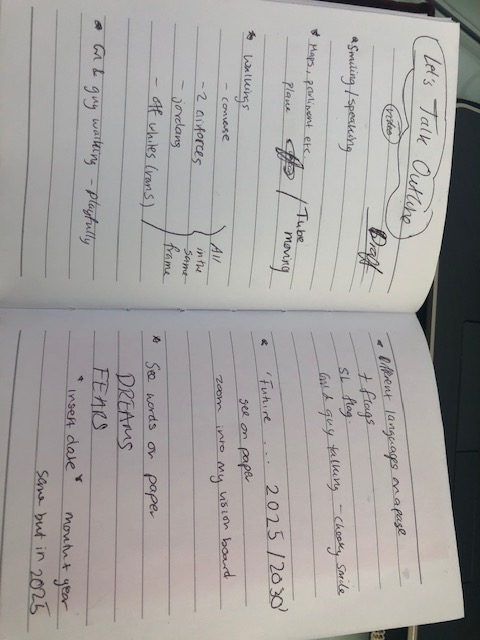 When speaking to Sabrina, she advised on creating a storyboard or at least a brief for what I wanted to achieve – this included having a clear beginning, middle and end. I had a clear idea of how I wanted it to go initially before I started editing. Following Sabrina’s advice, I listened to my spoken piece and for every line/idea I mentioned I wrote down the kind of visuals that I wanted to go with it. Then I began the editing process by finding the individual clips based on the idea I had and adding them together, some of the clips I also filmed myself.

I would say my improvements from my first video to this one were that my transitions were much smoother, I thought a lot more about the varying speed of the different clips and the impact this would have on what I’m saying at the time e.g. there is a point in the poem where I say ‘I’m gonna need to note down this all down before I forget’ and I intentionally made this part faster in order to emphasis the hastiness of excitement of me wanting to ‘note down’ all of these meaningful topics I’ve mentioned.

The full video can be found here 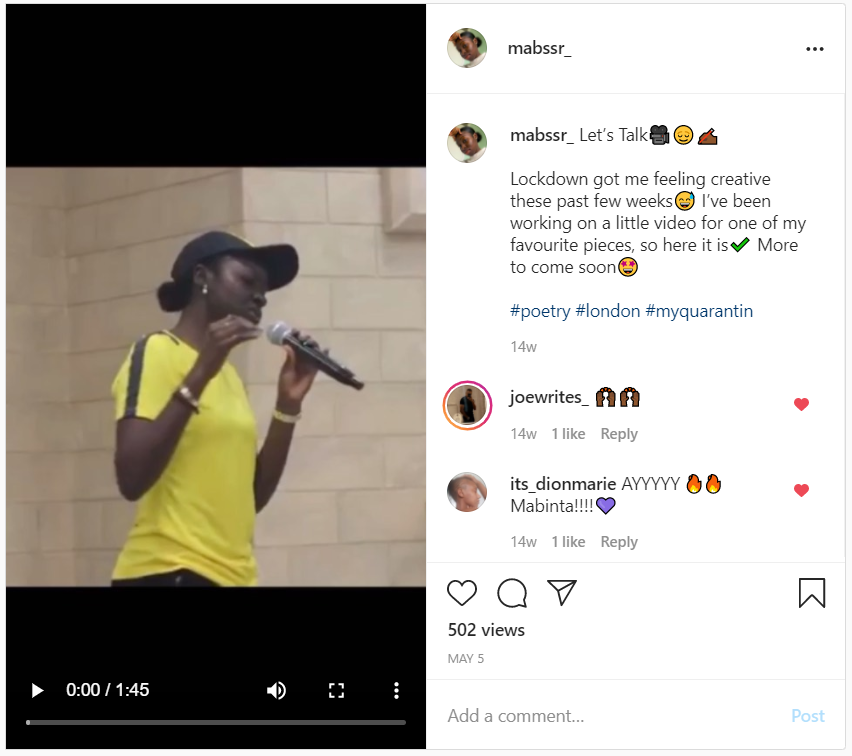 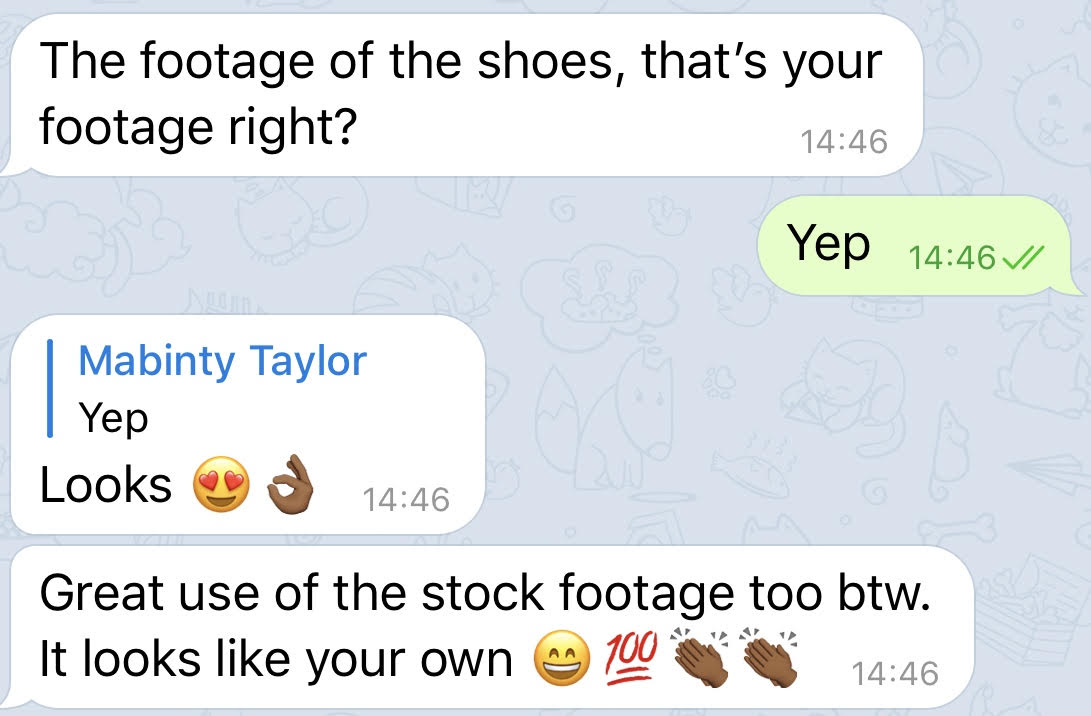 I can say that I have thoroughly enjoyed working on this skill. Video editing is such a broad skill and even just exploring the basics has allowed me to learn a lot, playing around with visuals has allowed me to paint the picture – that I usually do just with words – even better.

It has allowed me to be more intentional in my delivery as a spoken word artist, thinking about which word and phrases I put emphasis on and it has also allowed me to analyse my style which often takes on a story-telling vibe which is a plus for me as the adding of visuals almost just enhances the story.

Speaking to Cain and Sabrina was useful, in that it helped me to get a professional lens on what the world of editing looked like. They both have other art practises as well, fine art and photography, so hearing this was even more useful as it allowed me to understand that editing is one of the many things they do similar to me, that they can make extra income from. I’m looking to speak more to Cain regarding paid opportunities and how to acquire them but in the meantime before that I plan to start with building a small portfolio for myself including a few examples of my work as this will help me to really improve the skill.

The biggest unexpected development for me was just how powerful video is to tell the story and it’s impacted the ideas I now have of how I can write in order to tell any story I want. Something I hope to be more successful with next time, on the editing side of things is having better transitions, experimenting more with colour (e.g. using black and white clips and thinking about what impact that can have) and even things like stickers with quotes and moving images.

Developing my practitioner identity and style

One creative experience I can talk about is an exercise we did at M&C Saatchi in one of our master classes in February. Whilst talking about personal branding, we did a task where we had to describe the person next to us, who were the other young leaders, in 3 words. As a result we received 3 words back which were a description of ourselves from our colleagues. Now I liked this activity as it was interesting to find out how other people would describe me in a few words based on what they know of me so far and why (considering that I’d only know everyone for about a month and a half at this point). As we learnt in the session our personal brand is very important and has an impact on how our audience/market interacts with our content and our relationships with the people we work closely with.
The three words used to describe were: articulate, ambitious and reserved. Though I hadn’t previously given much thought to how I would describe myself, I thought these were quite accurate and I found it really useful hearing this as it means people have naturally seen this in me. Going forward from this, I’ve been thinking about how I express these. For example I’ve been thinking about the moments and also the things I am most ambitious about and how I show that to the people around e.g. through pieces of work I’ve done and what I put most of my energy towards. I’ve made a conscious effort to use this when applying for opportunities or even job roles. When writing, particularly my poetry, I continue to make an effort to widen my knowledge and vocabulary so that I am consistently improving the quality of my writing. I felt empowered hearing these descriptions of myself and I’d like to hope that this exercise was also useful for those I wrote descriptions for. This is something I’m going to continue to do